Tube Weaning and for the love of Cheerleading!

It’s been a long time since I’ve posted to this blog. I had all intentions on writing a Tube Weaning Blog but never got around to it! Well here goes with an update on Bella and the exciting news that she is now tube free!

I write this with tears in my eyes because it’s hard to put into words the massive impact that a passion for sport (Cheerleading!) and meeting a special person has had on Bella’s life. As you know Bella has been living with the rare disorder called eosinophilic oesophagitis all of her life. When she was 7 years old the difficult decision was made for her to have a feeding tube inserted in her stomach (hence the start of this blog). For nearly the last four years she has received 90% of her nutrition from an elemental formula through a feeding pump 10 hours a night. This disorder affects both her physical and mental health. Thanks to the feeding tube she began to have enough energy and strength to participate in sports and in 2013 chose cheerleading as her passion. As she is petite for her age she was a flyer for her Level 1 cheer team. Cheerleading became her life. She lived to fly. She enjoyed the excitement and challenges. But she was still plagued with self-esteem issues as she compared herself to everyone else and felt inferior and hindered by her feeding tube. She dreamed to be able to wear a cheerleading crop top like her team mates.

Last Christmas school holidays we decided to go ‘cold turkey’ from using her feeding tube and try to eat enough of her limited diet (with vitamin supplementation). It was hard, very hard. But Bella had a goal in sight. She wanted to get her feeding tube out and fly even higher in cheerleading this year without it. Then her cheerleading gym had their team try outs. Bella was placed in a team, but not as a flyer. They did not have a spot for her as a flyer this year. Bella was devastated. She wanted to quit. She wanted to quit on life. Cheerleading was her life. It was the one thing that she had in her life that gave her enjoyment. When she was flying, she felt on top of the world. She wasn’t thinking about the next medical appointment or the next tube feed when she was in the air. As a mum you do anything to help your kids succeed, but when you see them hit rock bottom, you hit rock bottom too. I searched our local area for other activities she could participate in; Gymnastics, competitive Aerobics, Ballet... She just wanted to fly. Thankfully I persisted and found another cheerleading studio (Sunshine Coast Cheerleading) that was half an hour away (compared to 5 minutes away) and we met Chantelle the owner and one of her coaches Jarah. As soon as they met her they knew she was born to fly. They welcomed her into their studio with open arms, along with the rest of their cheerleading family. They accepted her for who she was and not only did they place her as a flyer in a cheerleading team, Jarah asked if she wanted to partner stunt with him. Not only was she flying again, but she began to soar.

Even with a feeding tube, she was, in just a few days of practice trying and nailing Level 5 stunts! With this new motivation and encouragement she now had an even stronger determination to succeed so she began to drink her elemental formula again. Now that she was drinking her formula again she was back on track to getting her feeding tube removed before the first cheerleading competition in June this year. We had planned on scheduling the surgery after Easter but Bella fractured her wrist skateboarding so as she was unable to train with her wrist in a cast we took the opportunity to get the tube taken out sooner so she wouldn’t have to miss too much training (cheerleading after all is her motivation). So on the 3rd March, Bella underwent the surgery to remove her feeding tube. I’m very thankful that we had taken out private health insurance a few years ago as I was literally given an appointment the following week from when I phoned the surgeon! Two weeks ago she had recovered enough from both the feeding tube surgery and the fractured wrist to start her partner stunt training with Jarah again. She wore a crop top for the first time and was not embarrassed of her scar - it's now a badge of honour for what she has been through. In some ways it will be harder for her now as she is still reliant on supplementing her limited diet by drinking elemental formula to meet her nutritional needs but it will be easier for her to pursue her cheerleading dreams and that makes it all worth it. We will be forever thankful to Jarah (pictured here with Bella). The power of cheerleading has changed our life! Stay tuned as Bella’s aiming for Olympic gold in the future if Cheerleading ever gets accepted as an Olympic sport that is! 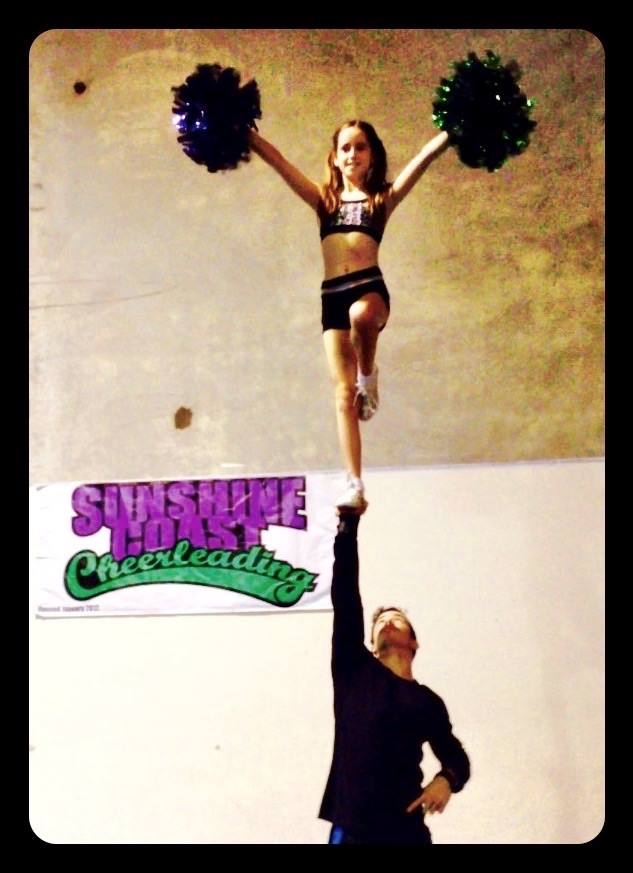